​​Quick Tells it's wastn't made by Fiat:

On January 4th 1980 the US Government charged Fiat with violating the  Nation Traffic and Motor Vehicle Safty act. Why?  Rust.  On March 3, 1981 (14 months later) Fiat asked for another " more impartial" Judge.  Denied.   Fix rust issues or get out of the US market!
Fiat wanted out... needed out... of the American Market.  Rumor has it that with all the goodies packed into the little spider they were also losing money. It had been 16 years. In Europe - I am told - the Spider had been missing since 1975 when US emissions had become standardized. The design while still beautiful was getting dated. The american magazines were making fun of it's "old" design, Congress had turned on them, and with terrorist bombings of the 70's back home in Italy  (the so called "years of lead") Fiat had gotten tiered of it all.... so Bu-bye Spiders. With some bodies still left in stock they decided to let the 124 Sport Spider go and focus on other models for everywhere else but the once lucrative US market.

Enter Malcolm Bricklin: Malcolm Bricklin had brought Fuji Scooters and Subaru cars to America in the mid 60's. Now Bricklin hears from former Fiat of America co-founder Tony Ciminera that Sergio Pininfarina and Nuccio Bertone were still interested in making cars.  Fiat would still supply engines and drive trains. The American gas crisis of the mid 70's was still fresh, Italy had long been taxing motors over 2 liters, the Lampredi 4 was a gas saving jewel, so why change.  So Bricklin had another opportunity to import cars into USA and Europe gets the sexy Spider back - but improved.

Bricklin, Pininfarina and Bertone created International Auto Importers... or iAi. Tony Ciminera worked with Pininfarina right away to upscale the cars. The ONLY car ever made, and badged as a Pininfarina, these cars sold on average 2400 cars a year.  This quote from a 1983 iAi press release: " While preparing the classic Spider sports car convertible for production in his own modern assembly plant, Pininfarina authorized more than 100 design and engineering improvements, all to assure extraordinary quality in the only car to bear his name"  Our Spider Specs page will try to highlight many of these improvements.

So improve they did​. Now named the Azzurra ( or SpiderEuropa in Canada and reintroduced into Europe) it came standard with leather, air, new dash layout for better ventilation, better instrumentation, alloy wheels, new carpets, better truck space with battery and Jack placement improved, and now those silly little back seats of the Fiat years are a useful luggage shelf. ( yes room toss your guitar and amp.)

​Now at $16,900​ (about $41,000 in 2014 monies) the Azzurra was priced near a Lincoln Town Car, it was getting pricey. But a classic in a boring "K car" or VW Rabbit design world. The auto world had gone all boxy and Cam Tail. The modern design of the day was the wedge. (like the Bertone X1/9, The Fiero and Ferrari Mondial). In it's day the auto press commented that the Spider looked tired and outdated. They raved the fresh wedge designs of the day, suggesting Pininfarina should have freshened the design. But, not over-improving designs was a Farina family tradition. Most Pininfarina designs have proven timeless.

​Ferrari 308GTS spiders sold more.. even if it was 3 times more money.  But our Italian mistress is 80% less expensive to fix than it's Maranello made cousin.  And..... you can drive it to it's fullest, use all 5 gears without risking a speeding ticket....​And that my friends is partly the point..

​The '83 Catalog opened with a line from Mr Bricklin: "Dear Motoring Enthusiast: The Pininfarina represents the first automobile to be manufactored in it's entirety by the world famous Italian coach builder Pininfarina"

We would love to hear from Mr Bricklin or Mr Ciminera or anyone else who was around at that time. Tom Tjaarda lives in Italy we would love to get insight from him. We have a little more on Tom's history on next page.      Below are cool dealer packets sent from Pininfarina: 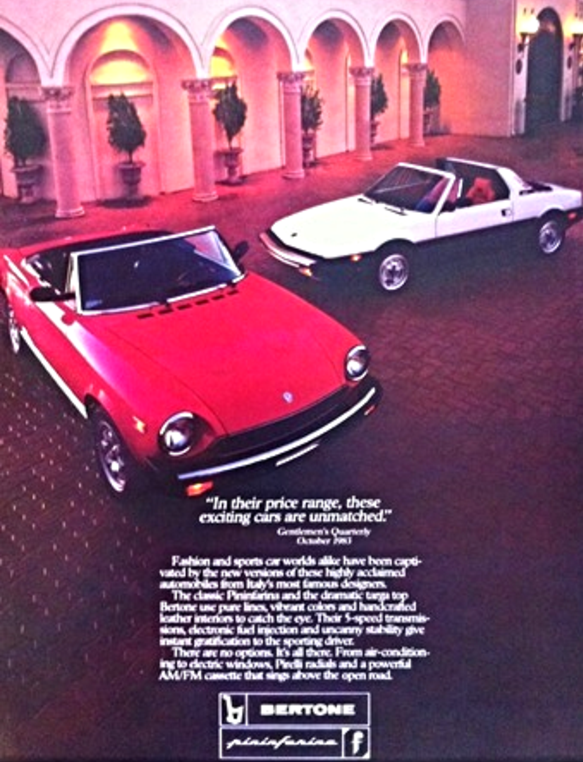 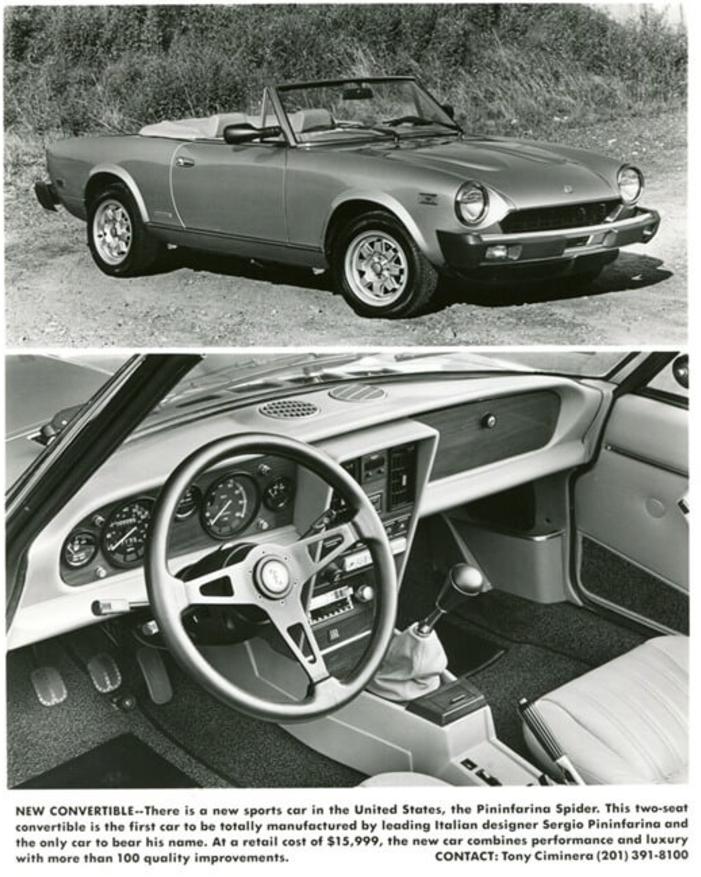 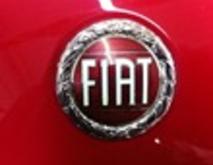 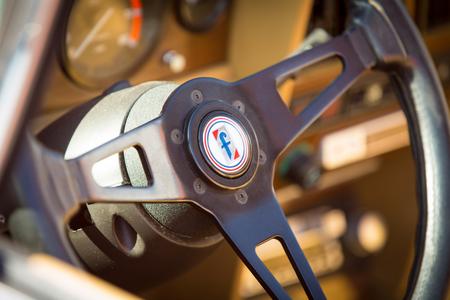 Fiat is out,  Pininfarina is in 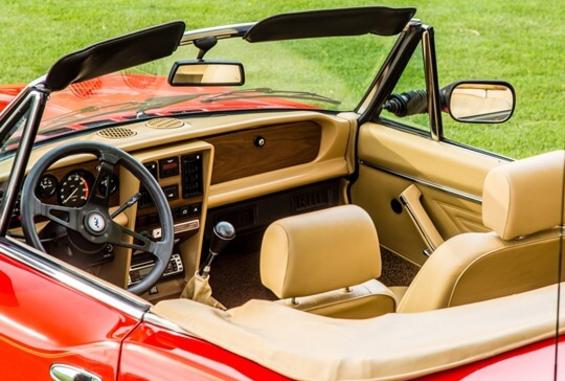 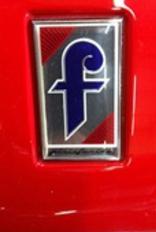 Offered together with Bertone  to better auto dealers the name Pininfarina  was well known. They reminded potential dealers that this was a chance at selling the Ferrari DNA to your customers. The Bertone half of iAi was more "modern" in it's wedge design, and cheaper. The new iAi offered dealers had some sexy italian options to offer customers of every age.​
The name Pininfarina had cult like status by the 80's. The New York Museum of modern had a '47 Pininfarina Cisitalia coupe on permanent display (Read our history page) Ferrari was the "it" car for anyone growing up in the 1960's.        Pininfarina meant Ferrari and Ferrari meant Pininfarina.

In the 1950's and early 60's race car drivers literally died trying to beat Ferrari. Ferrari was seen as dangerous and curvy and sexy. To Enzo Ferrari racing was everything. But early on, to finance his racing, he made some limited production race cars into luxury cars for the rich and famous..... Ferrari was exclusive and painfully cool..... this iconic "jet set" image lives on even today.
Distribution for iAi  was not easy, the old Fiat dealer network was burned by repairs and rust.  But... if you wanted a little sports car in the 1980's you now had very few choices. Savy dealers knew there was a growing middle class of "yuppies" that would want hot little italian cars.
Pininfarina also re-opened up the abandoned European market. But the UK got short  changed, as iAi claimed to be too busy to make right hand drive Spiders. So the UK had to order personal imports from the factory.  We'll show you a "personal Import" brochure from the English importer Dennis J Hands, ( odds and ends page) who handled the details for UK customers. Right hand drive Spiders are very rare!​

Then Sergio Pininfarina doubled down and upscaled yet again for 1986 model year. Bringing the price closer to $20K he made cars aimed at the Porshe 911 and Ferrari Mondial. The 85.5 model was killed after 1200 cars to make bodies for Cadillac. Imagine that today.... a car designed in 1995 getting  rereleased in 2015. Is there a timeless design in any of todays cars? 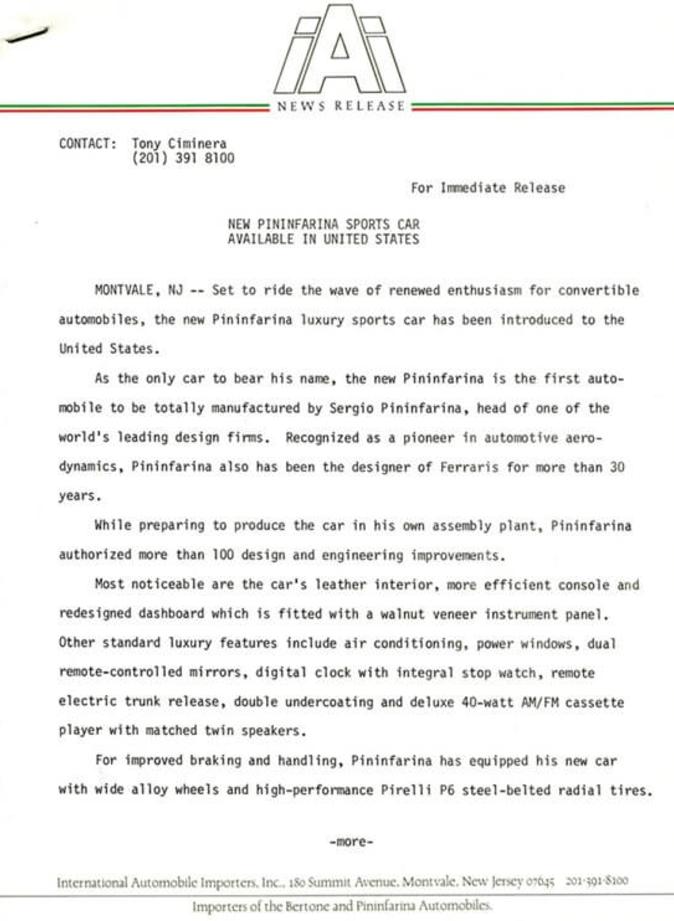 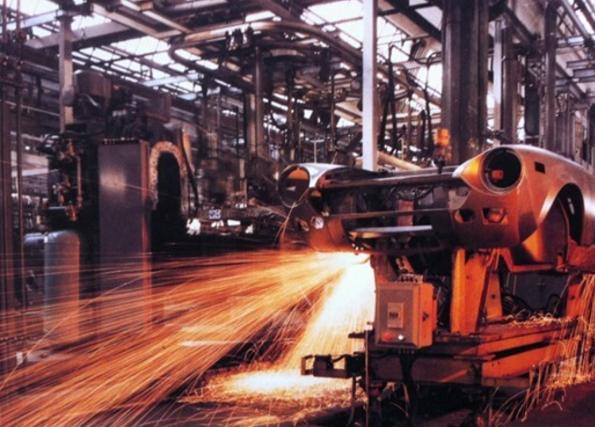 Note the brag about warranty, shedding the Fiat reputation. This was now the best rust warrant in America. An unheard of 7 year rust warranty !

And always mentioning Ferrari. "what true..sports cars are meant to be."   Plus you get a 5 speed transmission.

No doubt the Mercedes was built better but using an inflation calculator in 2016 dollars the Pininfarina is $42K (BMW 3 series money) today and the Mercedes would be about $110K (new Mercedes 500SL money.)

<----The F logo. A Farina family logo. A 60's classic. Different from the Fiat logo seen on the top of this page.. Square logo's installed on cars made after mid 1984. Also.. The Sail logo on trunk has the "A" for Azzurra . ( more geeky info like this if you go to links below)

<---Longer chrome clips for anchoring the tonneau cover that fits over top top when it's down. The Fiat is a small tear drop shaped clip about 1/4 the size. 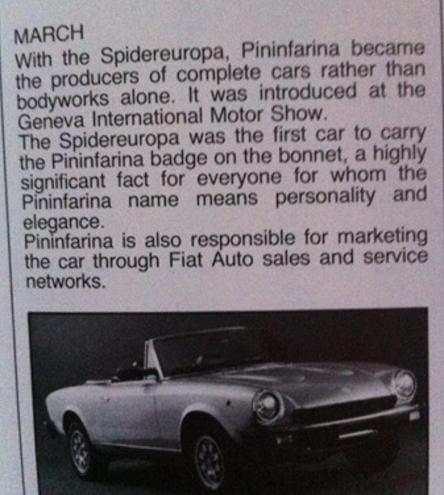 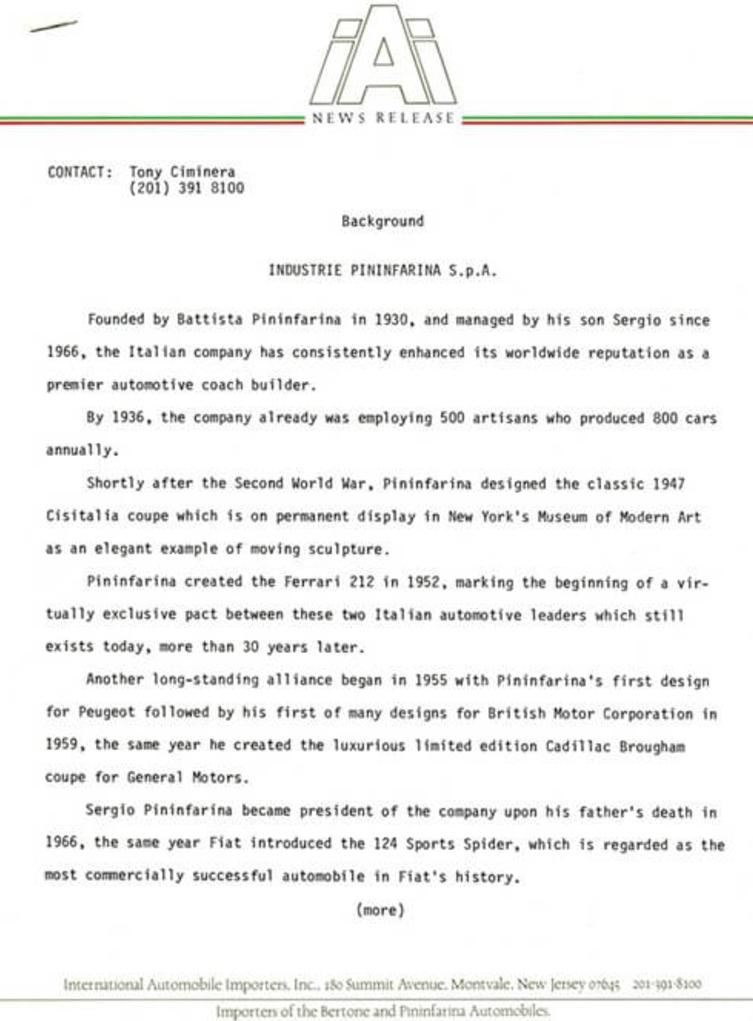 In Europe they still had Fiat dealers to work with. But the USA market proved to be harder to get distribution done.

<---Cromodora Wheels now standard on every Pinin. (optional on post '80 Fiats) Cromodora is owned by Fiat and used on upscale models like the Fiat Dino and on Ferrari models like the 246GT's (Dino) 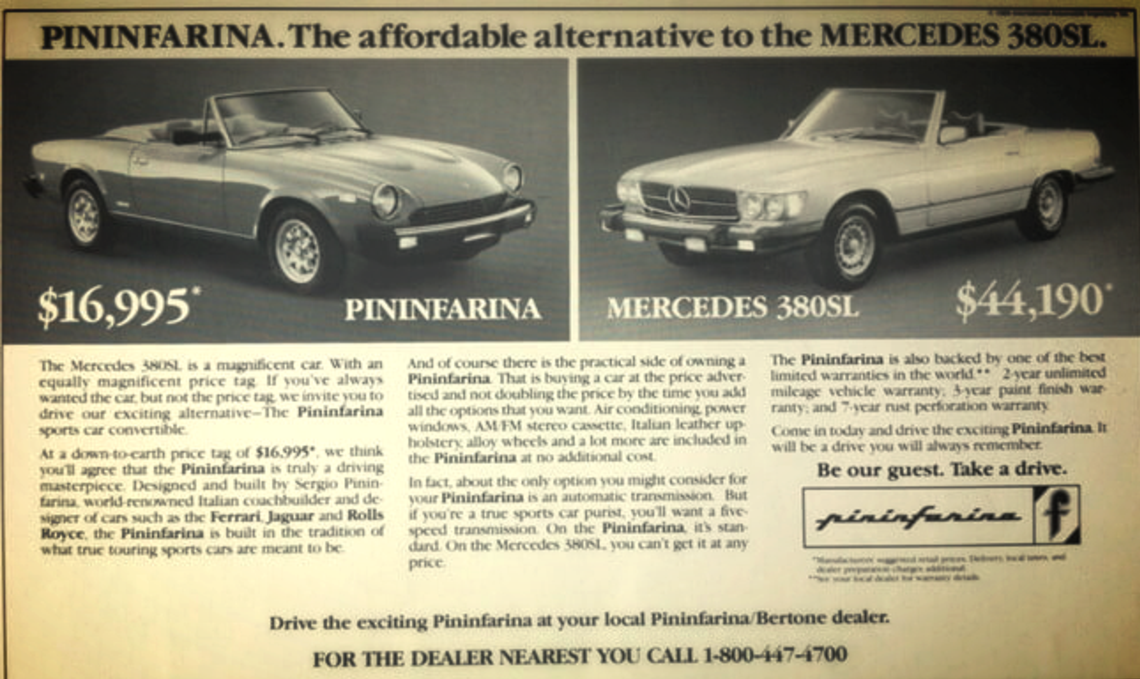 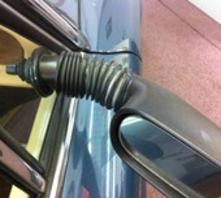 A fairly famous photo of Pininfarina making it's own car. Dramatic sparks fly.

For the first time the 124 spider design   with just one badge.... The Pininfarina Badge.

<---- Pininfarina designer logo just behind the door on bottom. On the Fiat's the logo is simply the letter F. Not for Fiat but for Farina. This was the more modern 60's style logo. More info in links below. 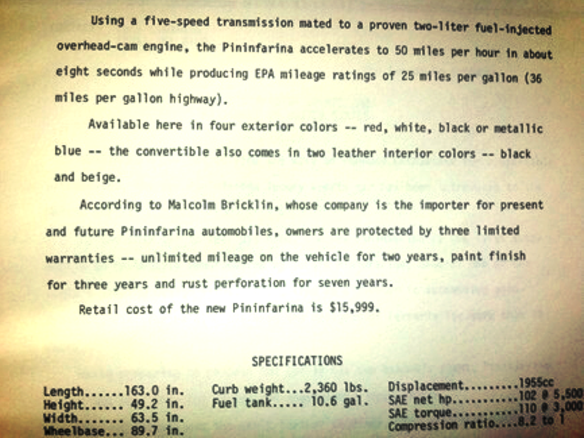 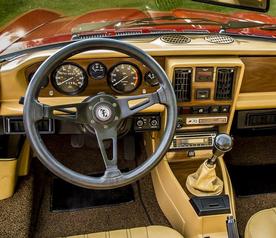 A bit more rare, here is a magazine ad for iAi from 1984. Note the upscale backround. No longer a budget sports car to compete with MG as they were gone. Now the rising middle class (called Yuppies in early 80's) was the target audience. BTW $17K is about $45K in todays monies. About the same money as a BMW 3 series in '84.... or in 2017.

Dash has a "box" coming up out of the middle. This raised center stack is only on Pinin Spiders. Done in part to improve ventilation, better access to controls like windows... it's also just a better design.  ---------> 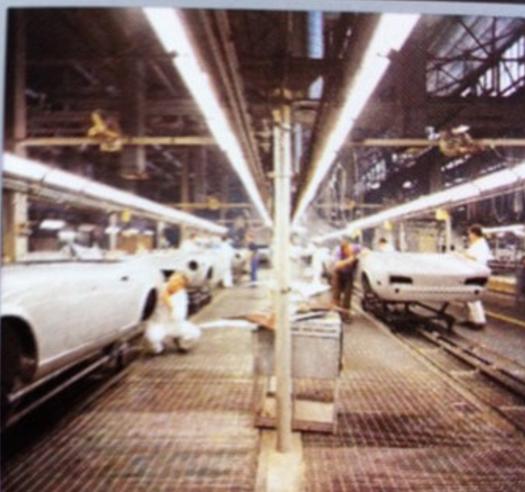 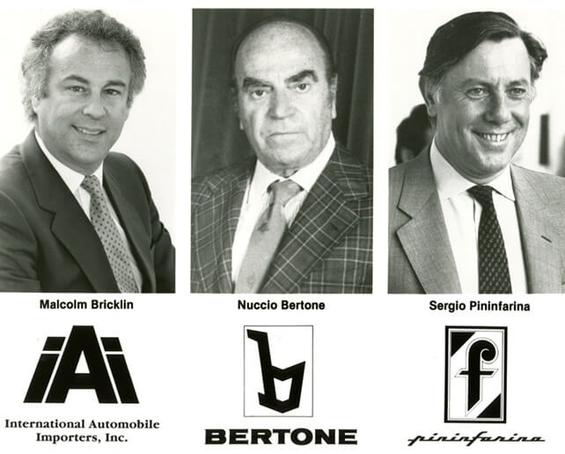